The blog has been quiet, I know, especially on the book front. April has not been a great month. As you may or may not know, I was in an accident on 29 March, in which my car was completely written off. So aside from the minor injuries I had, I was supremely depressed. I had two weeks’ leave coming up from mid-April, but was so sick and uncomfortable, that the first week was pretty much wasted in pain, in bed, but at least with my audio books. So to the update then. Fifteen books since the last time: 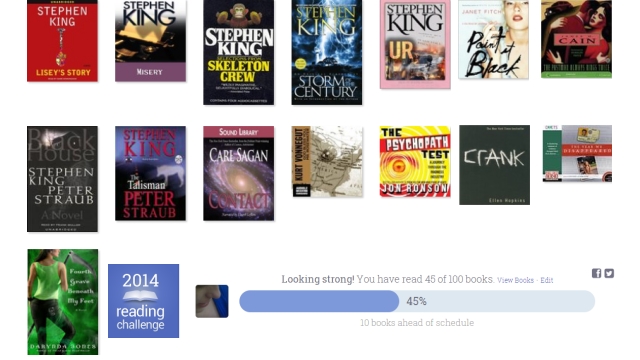 But before that I read the fourth installment of Darynda Jones’s Grim Reaper series. I’m really enjoying them. A book I really didn’t enjoy but for some unknown reason listened to to the end, was Crank. The rest were pretty good, and I am currently on my eighth consecutive Stephen King book. They kept me company when I couldn’t sleep due to pain or a worrying mind, or whatever other reason resulted in me awake and miserable. Also, probably not the best books to listen to if you want to drift of – often due to the tension, rather than anything else. He really is a brilliant writer.

Anyway, I’m hoping that posts will happen a little more regularly now. Work is hectic, but I am independently mobile again, beyond broke, and as such should have lots of time on weekends to write.

Tell me what you’ve been reading, and while you’re at it, who’s your favourite author?

Review: City of the Dead→