I don’t often post personal content, and what follows was written a bit in anger, it will most likely piss a lot of people off (there’s no nice way to say how people probably will react), but whatever.

Recently (as in four days ago) I shaved all my hair off. I did it in 2011, a few months after my mom was told her cancer was in remission. This year I was undecided about it, but when it came to the day, I thought about all the people I know, and who have touched my life, who were diagnosed with cancer: my awesome hairdresser who always perform miracles with my fine, thin hair on a budget, my former landlord who refused to let me spend New Year’s Eve on my own, and fed me on several other occasions, the boyfriend of a colleague who turned into a great friend – both of them. And so I decided, why not? And sat down while Mark Fish instructed Flo Simba on the best way to approach my shoulder-length hair with a set of clippers.

So many people told me that I was brave for doing that. And it annoys me. I changed my hairstyle – sure it’s a drastic cut, but there’s nothing brave about it; hair grows back. It’s not brave to post a picture of yourself without makeup. It’s not brave to get a hashtag trending.

It’s brave to allow doctors to pour poison into your veins because you want to live. It’s brave to lose all your body hair and not give up the fight. It is also brave to neglect your family life, your social life, all in the pursuit to find a cure for the most deadly disease; a disease that can be fought into remission, but not eradicated.

What so many people of Generation Me (symptoms of which seem to be contagious to other generations too) don’t get, is that other people’s battle with cancer is not about you. It’s not about how pretty you are without makeup. It’s not about the advertising revenue a hashtag could potentially generate (unless you actually raise those funds and give it to the people struggling or for cancer research). It’s not even about raising awareness by being a woman with a bristly buzz cut.

Have you donated money to cancer research? Have you organised a bake sale to raise money for a friend who not only has to deal with getting better, but also the knowledge that pretty soon the medical bills will start rolling in, and they don’t know how they will deal with that.

I’m not saying you shouldn’t do anything, but do you need to shout every (intangible) thing you do from the rooftops? Have you offered to bring over dinner; to sit and read to your friend during chemo; to drive them to or from their treatments; to do a load of laundry? Did you drop off a bag of groceries just because? Did you pick up the phone and asked them how they were doing, and offered to be there if they ever want to talk, about anything, any time of the day or night?

No one needs to know what you have done to make a difference; the people who matter know, and that’s all that matters. Not your nominations, not your pictures, not your good intentions. Stop talking. Start doing. 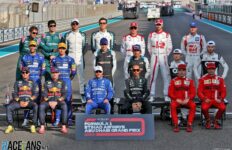 And now for something completely different: Thoughts on the 2021 F1 WDC→